Ten years later, Japan mourns the victims of the earthquake and disaster in Fukushima. From Reuters 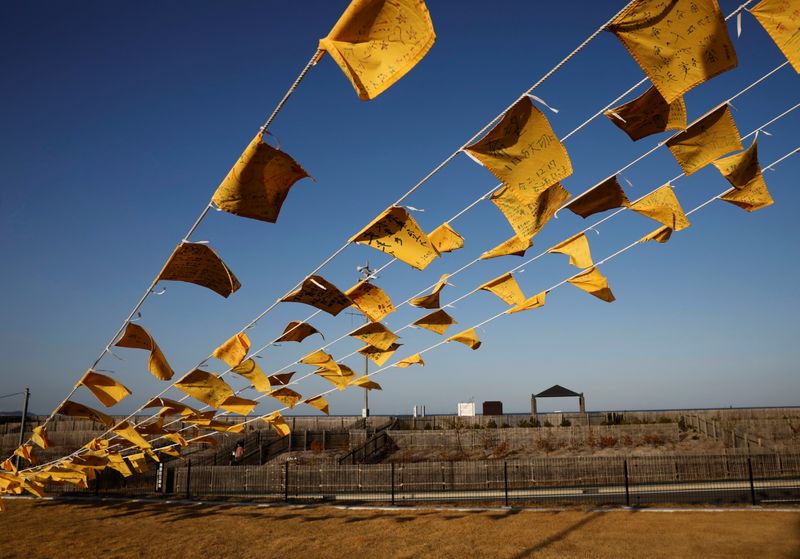 © Reuters. Ahead of the 10th anniversary of the Fukushima disaster in Iwaki, yellow handkerchiefs with messages are hung to support people in areas hit by the 2011 earthquake and tsunami

IWAKI, Japan (Reuters) – With a moment of silence, prayers and anti-nuclear protests, Japan on Thursday mourned 20,000 victims of the massive earthquake and tsunami that hit Japan 10 years ago, devastated cities and sparked meltdowns in Fukushima out.

Huge waves triggered by the 9.0 magnitude quake – one of the strongest ever recorded – crashed against the northeast coast, crippling the Fukushima Dai-ichi power station and forcing more than 160,000 residents to flee as radiation into the air streamed.

The world’s worst nuclear disaster since Chernobyl and the tremors made survivors overcome the grief of losing families and cities to the waves in a terrifying few hours on the afternoon of March 11, 2011.

About 50 kilometers south of the plant in the gritty coastal town of Iwaki, which has since become a hub for workers working on decommissioning nuclear weapons, restaurant owner Atsushi Niizuma prayed to his mother, who was killed by the waves.

“I want to tell my mother that my children, who were all close to her, are fine. I came here to thank her for keeping our family safe,” said Niizuma, 47.

Before heading to work, he quietly paid his respects at a stone monument at a seaside shrine with carvings of his mother’s name, Mitsuko, and 65 others who died in the disaster.

On the day of the earthquake, Mitsuko took care of his children. The children stormed into a car, but Mitsuko was swept away in the waves when she returned to the house to collect her belongings. It took her body a month to recover, Niizuma said.

Akiba Shrine has become a symbol of resilience for survivors as it was barely damaged by the tsunami while nearby houses were swept away or burned down.

About two dozen residents gathered with Niizuma to decorate it with paper cranes, flowers, and yellow handkerchiefs with messages of hope from students around the country.

“It was sleet 10 years ago and it was cold. The cold kept reminding me of what happened that day,” said Hiroko Ishikawa, 62.

“But when my back takes in the sun today, we feel more relaxed. It’s like the sun is telling us, ‘It’s okay, why don’t you talk to everyone who came back to visit their hometown?'”

MEMORY OF THE DEAD

At 2:46 p.m., just as the earthquake erupted a decade ago, Emperor Naruhito and his wife held a moment of silence to honor the dead at a memorial service in Tokyo. Silent prayers were held across the country.

Prime Minister Yoshihide Suga told the memorial ceremony that the loss of life is still impossible to look at.

“It is unbearable when I think about the feelings of all those who have lost loved ones and friends,” said Suga in a black suit.

At the ceremony, which was attended by the emperor and prime minister, participants wore masks and kept their distance and did not sing along with the national anthem to prevent the spread of the coronavirus.

“I would like to express my condolences from the bottom of my heart to all those who have suffered the effects of the disaster,” added Suga, reaffirming his support for those affected by the disaster.

The government has spent around $ 300 billion (32.1 trillion yen) in rebuilding the area, but the areas around the Fukushima plant remain closed, radiation exposure concerns remain and many are leaving the area have settled elsewhere. The shutdown of the crippled facility will take decades and billions of dollars.

Around 40,000 people are still displaced from the disaster.

Japan is again debating the role of nuclear energy in its energy mix as the resource-poor country aims to achieve net carbon neutrality by 2050 to combat global warming. However, a public television poll by the NHK found that 85% of the public are concerned about nuclear accidents.

The work to shut down the destroyed facility in Fukushima Dai-ichi, to deal with contaminated water and solid waste, and to secure the area is immense.

Every day around 5,000 workers go through gates into the crippled facility to pull apart the facility, whose reactors still contain around 880 tons of molten fuel waste.

The plant’s operator, Tokyo Electric Power (TEPCO), has estimated the project would take decades, while critics say it could take up to a century to get the plant back up and running.

The mass demonstrations against nuclear power after March 11 have faded, but suspicions persist. Some anti-nuclear activists are planning demonstrations in front of TEPCO for Thursday evening.

Only nine of Japan’s 33 remaining commercial reactors have been approved for restart under Fukushima safety standards, and only four are operational, compared with 54 prior to the disaster.

In the first half of 2020, nuclear energy provided only 6% of Japanese energy requirements, compared with 23.1% for renewable sources – far below the 46.3% in Germany – and almost 70% for fossil fuels.

Dow earnings rise due to higher chemical prices By Reuters